This week, while Ruby Tuesday blog surfing, I came a cross some Red Balloons. The kind you ride in. That got me thinking about this song. Sung by the 5th Dimension in the 60's and 70's. They were best-known for popularizing the hits "Wedding Bell Blues", "Stoned Soul Picnic", "One Less Bell to Answer", "(Last Night) I Didn't Get to Sleep at All", and "Aquarius/Let the Sunshine In", and this song "Up, Up and Away". This song released on 1967, received 5 Grammy awards. It started their number one singing career in the United States. I really liked all their song and still know them all by heart! 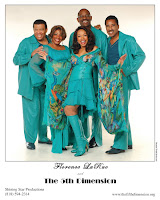 The original 5 members shown in the video are Billy Davis, Jr., Florence LaRue, Marilyn McCoo, Lamonte McLemore, and Ron Townson.
Willie Williams replaced Townson, who died in 2001 due to diabetes-related kidney failure. McLemore retired from the group in March 2006. McCoo and Davis continue to tour separately as their own act.
In 2009 the group "Florence LaRue & the 5th Dimension" started to tour again. Led by LaRue with Willie Williams, Leonard Tucker, Patrice Morris, and Floyd Smith (Pictured here). You can visit their web site by clicking on this photo. I have to admit I like today's clothing. The plastic dresses in the late 60's were not by favorite.
Posted by Auntie E at 12:00 AM