The day started out having breakfast with hubby. The weather is rainy off and on. Not too bad. This rain is like the Southern type. It rains and then it is gone and there appears to not be  puddles. The rain is mostly a mist with a few outburst. I have found the the outburst seem to wait until one is under cover. By the afternoon the rain had stopped . Mr Sun appeared and the heat was on. 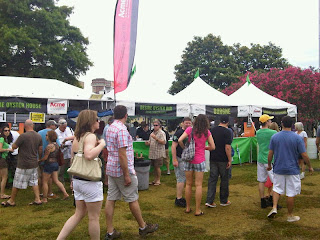 During the rain part I went to the Riverwalk Mall outlets. Sadly most of the stores were empty and the rest had going out of business sales. I could see all the damaged caused by Katrina. Once through the Mall area I walked done Canal Street.  On to Decatur  Street which is the beginning of the French quarter. Followed that down  and around to the Oyster Fest. Kind of like a circle. Anyway, I join up with the Oyster Fest and have a great time. The Oysters were great, I had Charbroil Oysters, Fried Oysters in a almond sauce  and catfish sliders. All very good. Listened to some great Jazz Music  by the Bass A Holics and watched a cooking demo by chef Brian Landry  of Borgne restaurant. Learned a lot about the fishing in this area. Will share later on with photos.

With the heat on I got a Snowball, pinacolada. Then walked the river walk back to meet up with Hubby a the convention hall. Later that night we went to eat at the same place as last night . Still great music. It was like Ozark back hills music, really enjoyed it. Tonight we will be trying another place for sure. I had Alligator again and loved it.

Ended the night with having to tell my daughter that  Great Aunt Frances passed away that day. She was 89 years old. She died from a massive stroke, which she had a few days ago. Aunt Frances joined the Catholic church and became a nun when she was 15.  Becoming part of the Franciscan  Order, became a nurse and worked in the catholic hospital for years. At the age of about 50 She left the nunhood and worked as a nurse in California. Then at  about age 60 she moved to live with my family, after she was diagnosed with uterus cancer and treated. Has been in a assist living filcility for a while about 10 years.

Today I will be going to a Plantation. Looking foerward to it. Come back tomorrow for more details. Do not forget I will be posting some photos on the On The Go Blog.( link on right side bar). See ya later.
Posted by Auntie E at 9:34 AM No comments:

We arrived on a sunny day. The temp was in the upper 80's, with a high humidity. That made the temperature seem higher. Met a couple from Arizona that stated it seemed hotter here even though the temps are higher in their state. Oh yes I remember how the humidity plays a great part in the comfort of the heat.


We walked the Streets and ending up at a Local Bar/Restaurant called Lucy's Retired Surfer Bar & Restaurant. The Food was very good and we did have a couple of Lucy's Classic drinks. They were Great, served with mermaids hanging and floating in the drink. The Place is Located on Tchopitoulas Street in New Orleans warehouse district. I would recommend a visit if you are in Town. Their Site has the history of the palce (link is above)

Well I did take photos however I need to purchase another  camera cord. You know how it goes....One thinks they pack everything but... there is always one thing left. So for today I will post some things courtesy of web sights. I did manage to post some real time photos on my On the Go Blog.
Be sure to take a peek. I will be posting more later today.

After Lunch we took a city tour with Vip City Tour.  Dino was our Tour guide. He was so much fun to be with. Told us all kinds of things about the city, both of the old and new. Pointed out some fun places to go as well as a shopping area that is 6 Miles long! Now I will have to revisit that area for sure. One place he took us to was the City of the Dead. Sounds scary huh, well not so...it is a cemetery that has tombs above ground. Now why is that... You see New Orleans is below sea level and as you would think the bodies would just float to the surface if buried in the manner we think of. I will not tell you all now about the goings on in that "City". However I will tell you it is very interesting to say the least. There is a photo of the City Of the Dead on the On the go blog. We really enjoyed the tour.

For Our dinner we went to a local restaurant called Mulate's. The food was the most delicious, we had Alligator and red beans and rice and hubby had a shrimp poboy.   Even had dessert , key lime pie and Bread pudding with hard sauce. The bread pudding was soooo good! It has been a long time since I had something that good. Maybe never before come to think of it. They had live music and plenty of dancing space. The Bayou Deville's were playing. You can see a photo at the web site link. Just loved that place.

Today hubby is in attending the Tech conference, so I will be venturing out later to check out the Riverwalk area.