It's Friday time for a question. I have been on a natural quest. Looking for ways to eat healthier and save time and money. Bought some New Kitchen Gadgets to help with Making wholesome food. Have a couple Donut makers and a new Mini Pie maker. I am really loving them. Making wholesome food that all have natural ingredients in them is a good feeling. As always I will be posting the Kitchen gadgets on my Kitchen site. These gadget safe time and energy. As well as helping me lose weight.

So I was wondering what is Your favorite Kitchen Gadget?

don't forget to visit An Island Life to see more Friday questions.
Posted by Auntie E at 7:34 AM 12 comments: 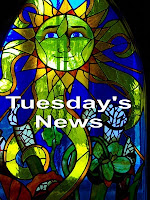 I have been having the eye crust lately. It returned after a year or so of getting it under control.Thought I knew what was causing it, so I eliminated it from my diet.Thought it was the Splenda as know as Sucralose. I stated using it years ago when I went on the Atkins diet. About three months later I noticed the eye crust. Went to see a lot of doctors and no one could cure it. Figured it must be an allergy so, I started to think what has been added to my diet. I use to use Sweet n Low for my sweetener. I changed to Splenda when I learn that my sweetener would cause my metabolism to slow down. Every thing I bought had Splenda ( Sucralose) it in it. Therefore I started there, it took me over 2 years to get it under control. Mostly because I did not realize the products that marketed it self as low sugar where using it also. As well as all the Atkins products. Once I started reading every label it was out of my diet.

So boy was I shocked when a couple weeks ago I noticed the eye crust was back. Not as bad but still there. It just wasn't possible to me how could this be? Funny thing happened Yesterday, I was at the store and noticed that my favorite creamer was now Fat Free. Looking at the ingredients, there was no Splenda in it. On a impulse I compared the ingredients to the regular one I buy. Low and behold the regular one had Sucralose in it. When did they make that change! So there you have it, Now I will have to start checking all the labels again. Even the ones I use regularly. It will probably take a few weeks to clear this chemical out of my system.

As for my sweetener to use. A few weeks ago I was asking what every one used. Decided to go with Agave Nectar and Honey. Found a Honey that works well with my coffee. The name of it is Meadowfoam by Bee Folks. I like their honey it is made locally. Every year at the Maryland Renaissance fair they have a booth. This year I went with a plan to find a coffee Honey. Meadowfoam has a great flavor and does not seem to have an after taste.

I did try some other sweeteners. However they had the after taste I do not like. the Agave Nectar is not bad. However I do not like it in my coffee. I do use it in everything else that needs a sweetener. I love it in my Morning Oatmeal. Bought a new one to try, Blueberry. Thought I would try it with real blueberries and my oatmeal. The Maple Agave is good with pancakes and oatmeal. I also like it with Sweet potatoes.

My Hubby has been in pain for a while. First his foot, then his leg and the lung started to give him plenty of pain. So, Yesterday he went to the VA hospital and had test for an Pulmonary Embolism, DVT and VTE. All came out okay. Seems he has a lung infection and a sore foot. All we can think is the foot got injured somehow. The Lung Scan showed that he has a Lung infection. Now on antibiotics.

Daughter had a Well Doctors appointment. She will be undergoing some blood testing for her Thyroid and Pituitary glands. Got a few shots that are needed for college next year. I can hardly believe it! time seems to have flown by!

As for me, Doing well, have seem to stayed out of sickness way. Foot is still healing from the sprain in early spring. It seems to be taking a little longer in my eyes. However, I haven't stop for too long to let it heal.

I could go on however I think I will end it here. So tell me how is your family? Or you can link up and I can visit your blog to read the going ons in your neck of the county.

Here we go again, Rain, Rain, Rain. I guess this is going to be a rainy season. So, I thought I would ask a question about Rainy Days.

What do you like to do on Rainy Days?

I think I will look into spending some time in my Vintage sewing room. I have quilts to work on and costumes to make. Crafts seem to be a great thing to do for me.

don't forget to visit An Island Life to see more questions.
Posted by Auntie E at 8:36 AM 10 comments: 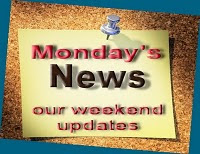 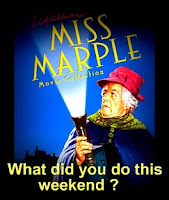 This past weekend we spent time at the Fair and had fun with the family. We took photos of the fun times. So here it goes, take a look at our crazy weekend.

On Saturday we took a trip to Crownsville Maryland for the Renaissance Fair. I love this time of year, the weather is just right and going to fairs are on my favorite trips list. This year a went in Costume and had my hair braided. I was looking forward to getting a honey for my Coffee. Been trying to find a good sweetener for it. The folks really dress up for the Maryland one, as you will see. Anything goes there, one can be transported back to that time and if you stay long enough one will start speaking in the accent and language. 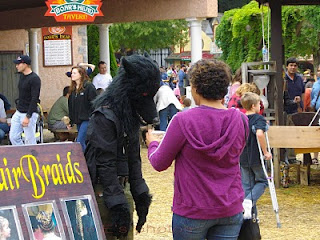 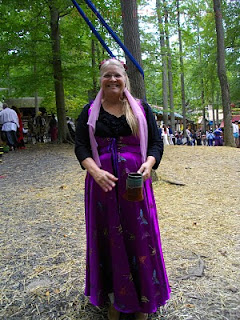 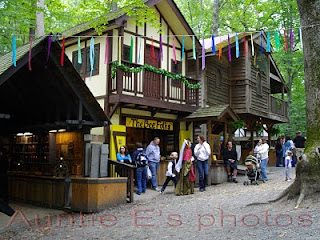 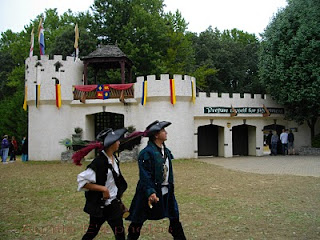 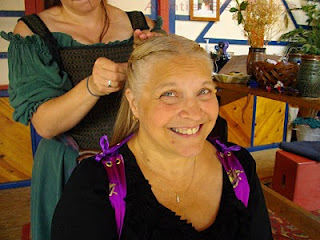 On Sunday after church we went to my niece Birthday party. It was a skating party. Yes I went skating. It has been years since I did this sport. Fell a few times, however I did do better than I thought. the kids enjoyed a glow light party with pizza and cake. 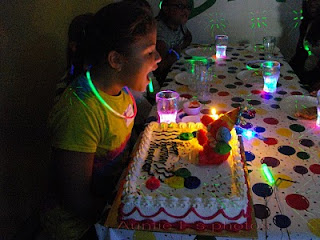 So how was your weekend?

Be sure to visit Writer Cramps to see more Monday's Miss Marple. You never know when you need that Alibi!
I add this post to Blue Monday this week, you can see more Blue Photos at Smiling Sally
Posted by Auntie E at 6:59 AM 8 comments:

It has been a busy week for us. the Fall season is a time for cleaning out the house and preparing for the wintertime. I need to start my cooking planning soon. Have been doing well with my weight loss, down 15 Pounds and still working on staying on the downward trend.
Family time has been busy. We had birthday parties and still have more to attend this week. School started and we have been working on a new schedule for after school activities. Exercise classes, Music classes and time for fair visits. Still need to go to the Renaissance ones. Maybe this weekend we will get to go to the Crownsville one. I want to find a good Honey for my Coffee sweetener.

My granny had her 94th Birthday, Happy birthday to her.She fell the broke a couple ribs but is doing well now. I spoke with her yesterday she sound great.

Need to mow the Lawn and clean the home in a few minutes. We have a crew coming to clean out the vents today. One of our Fall list of things to do. The Hurricane made me do some outdoor things already.

How is your season change activities going?
Posted by Auntie E at 9:53 AM No comments: 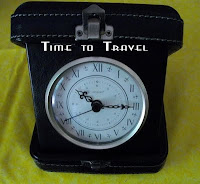 Well here we are in September. For us we have two celebrations. First is our Wedding Anniversary, this is our 34th. Then we have a long weekend due to Labor Day. I love the time of year. The weather can be hot our cool. Anyway it is a great time. This year we are going to go to Williamsburg and enjoy some time with family and some time alone.

What are your plans for LarborDay? Or if you do not celebrate this day, What are your special weekend plans? It could be a birthday, anniversary of some sort of just a holiday for you....


P.S. I will be posting on Auntie E's on the Go blog., So be sure to check in and add to your favorites. These are live photos, posted on the Go, via my blackberry.